Angola's Gross Domestic Product (GDP) increased by 0.8 percent in the third quarter of 2021, interrupting nine consecutive quarters of declines, according to the National Statistics Institute (INE).

Commerce was the activity that most influenced this variation. The Gross Value Added of Commerce grew by around 18.4 percent in the third quarter of 2021 compared to the same quarter of the previous year, contributing positively with 3.52 percentage points to the total change in GDP, which, according to INE justified by the significant increases in agricultural production, fisheries, manufactured and imported goods.

This was followed by transport, which contributed positively with 1.0 percentage point to the total change in GDP, due to "exponential growth in the air subsector, as a result of the increase in flight frequencies, substantiated by the partial relief of measures to combat covid-19". 19, and on the other hand, the entry into operation of new operators, in the urban transport service at Luanda level".

Fishing, due to the increase in catches in the period in question, and construction, which was boosted by the significant increase in imports of raw materials (cement and clinker), also contributed positively to GDP, with 1.0 and 0.9 percentage points, respectively.

On the negative side, oil activities stood out: the Gross Value Added of Oil fell by 11.1 percent in the third quarter of 2021 compared to the same quarter of the previous year, contributing negatively by 4.7 percentage points to the total change in GDP .

The drop was due to the decrease in the amount of oil extracted, caused by the maintenance of cuts by the Organizers of the Petroleum Exporting Countries + (OPEC+), the drop in crude oil stock levels and the decision by China to reduce the import quotas of the independent refineries.

The "Other Services" category, with a drop of 13.6 percent in Gross Value Added, contributed negatively by 1.2 percentage points to the total change in GDP, due to the substantial drop in hotel and restaurant services, in the order of 51 percent, as it has a higher weight within the group of other services.

The retraction of the Gross Value Added of Financial Intermediation and Insurance of around 36.8 percent, in the third quarter of 2021 compared to the same quarter of the previous year, also had a negative influence, contributing with – 0.5 percentage points to the total change in GDP.

The fall in financial intermediation activity was motivated by the fall in income in relation to costs in the period in question, as well as inflation, justifies the INE.

In the year to September, GDP grew by 0.04 percent compared to the same period in 2020.

This publication introduced some methodological changes, taking into account that information from the 2019 Annual National Accounts was introduced in the series; new change indicators were added and year-on-year changes were calculated from the non-seasonally adjusted basis, while the inter-quarter change is dependent on the adjusted basis.

Angola anticipates payment of debt to China with oil revenue

Inflation in Angola is expected to slow to 18.3 percent this year, estimates consultant 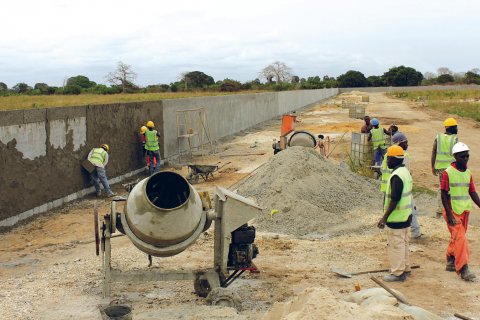