Opinion The opinion of Janísio Salomão

Following a fixed exchange rate system that has been in place for Angola's economy for many years, in January this year the BNA announced the new floating rate exchange system with the definition of bands and a 2 per cent trading rate.

In a statement made public, BNA emphasizes that this band ceases to exist, “once the objectives of the above measures are reached, BNA decided to implement a floating exchange rate regime in which the exchange rate is freely defined by the market, ie , according to the demand and supply of foreign currency”.

In fact even before these recent measures emanating from the BNA CPM, the kwanza was already completely off the rails and, in my view, the BNA had no alternative as it was living with two pressing problems:

The BNA then finds itself between the sword and the wall, and without alternatives decides to liberate the foreign exchange market, setting the market to dictate the price.

Fact that can not go unnoticed, is the price that the dollar has been knowing in the official market not to mention the informal.

The kwanza has already depreciated by 22 per cent in the period from January to September 2019. 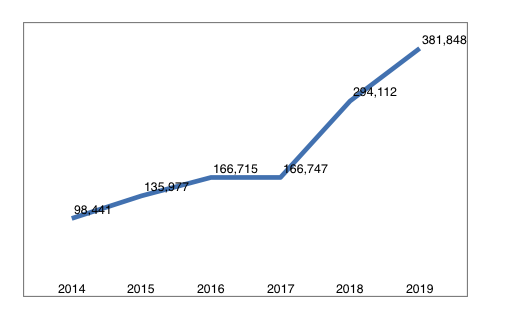 The susodified chart clearly adds to the behavior of the dollar price since the year of the crisis in the country (2014), leading to a 388% depreciation. The trend is clear, and subsequent months illustrate that if no corrective action is taken, the dollar tends to break the 700 kz mark by 1 Usd.

Consequences of the exchange rate hike

We do not have to be wizards to predict that the consequences of the rise in exchange rates will have an impact on the cost of living for Angolans. The touted message that rising currency prices will not affect the prices of goods and products is erroneous, we need not be scholarly enough. Angola is an importing country, much of the goods, sundry products, machinery and spare parts are imported, and such prices are indexed to foreign currency, so a change in the price of foreign exchange originate, they are quite inductive factors for updating Final prices.

The depreciation of the kwanza and the announcement of the entry of new banknotes of higher face value are factors that influence the demand for foreign exchange. In Angola there is still a considerable volume of money circulating outside the legal system or channels. are estimated to be close to 65 percent. A large part of the population does not place their funds in banks, associated with the fact that there are a considerable number of foreign merchants and not only that, who do not have their funds in banks, do not accept payment with automatic terminal payments (TPA), are considered sufficient factors to hoard its resources and escape the depreciation of kwanza and currency trading.

The main concern remains the products that are part of the basic basket, although the Production Support, Export Diversification and Import Substitution (PRODESI) Program was launched, domestic production is still incipient to cope with Monthly demand and needs of foreign exchange to ensure the importation of products estimated at more than 200 million dollars, just food, when added other products and spare monthly exchange needs reach the threshold of one billion dollars.

Cheap Kwanza would be synonymous with attracting foreign direct investment (FDI) however, when we look at competitiveness rankings Angola ranks 134th, with 2.7 points out of 140 countries evaluated, when we look at Doing Business we go down four positions, from 173 to 177, from 19 countries analyzed, indicating that there is still a lot of homework to do to improve the business environment and provide a favorable environment for the effective attraction of FDI. We still have a lot of homework to do!

I augur that the measure now introduced by the CPM “which aims to reduce the term of settlement of letters of credit” (1), has the intended effect, so that there is no shortage of products, especially those that make up the basic sixth.

As the rope always breaks from the weaker side, I hope our rubber band will be rigid enough to withstand the surprises that will still come to the Angolan economy.