Simplifying the Capital Market in Angola: How Does the Stock Market Work?

Without prejudice to the apogee of any Stock Exchange constituting the stock market, it is important not to lose sight of the fact that the stock market constitutes only one of the existing segments in a stock exchange.

Without prejudice to the apogee of any Stock Exchange constituting the stock market, it is important not to lose sight of the fact that the stock market constitutes only one of the existing segments in a stock exchange.

In this context, it is necessary to deconstruct the narrative that the securities market in Angola only emerged in 2022 due to the activation of the Stock Exchange Market (MBA), while other segments of the Active Market by BODIVA (Bolsa de Dívida) already existed. and Values ​​of Angola).

Following the success of the Public Offer for Sale (OPV) of the Ordinary Shares representing 10 percent of the share capital of Banco Angolano de Investimento (BAI), which culminated in the admission to trading of the shares of the respective institution on 9 June of the year in progress, thus activating the Stock Exchange Market and BAI, gaining 842 new shareholders, 95% of which are natural persons and 5% corporate entities, Angolans were positively impacted by the success of the process, thus creating an "Attentive Look at the Capital Markets in Angola".

Today, Angolans are increasingly becoming aware that in addition to public debt instruments (Treasury Bills and Treasury Bonds) and Investment Fund Participation Units, they can, through a simple investment instruction with any BODIVA Member (Commercial Banks and brokerage firms) to become shareholders of listed companies.

Due to this awakening on the part of Angolans to the market, many issues have been the focus of some debates, fundamentally highlighting the need to understand the functioning of the stock market.
But what exactly is the stock market? How are shares traded on the stock exchange? What is the gain in investing in stocks?

According to Carlos Bastardo, the shares are securities representing the share capital of a public limited company, with an uncertain income (dividend), that is to say, when an investor acquires shares in a company, he is buying a portion of the company. In the same dimension, Salgueirinho & Sereno, consider shares as securities that represent the share capital of anonymous companies and give their owner (shareholder) the right to receive dividends.

Now, looking at the two approaches, it appears that the shareholder's gain is essentially associated with the dividends intrinsic to the company's performance, in accordance with the terms of articles 239 and 326 of Law nº 1/04 of 13 February (Law on Commercial Companies ). In addition to the patrimonial right to participate in profits (receive dividends), the shareholder also has the right to vote and to be informed, without prejudice to the Company's statutory particularities. 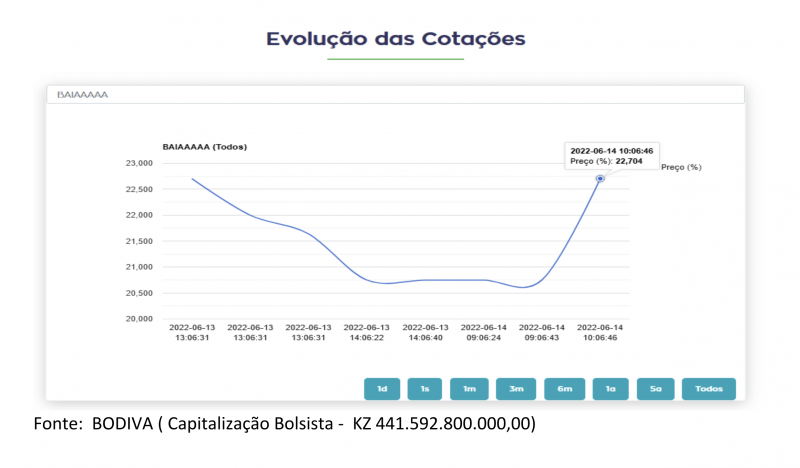 According to economic liberalism, there is a rationality of supply and demand and prices end up being naturally adjusted, making prices accessible to most investors. This means that the investor will be able to buy the shares of a company listed on the stock exchange at a higher or lower price depending on demand (buyers) and supply (sellers) in the market.

Without neglecting the law of supply and demand, which is par excellence the main variable that influences the fluctuation in the price of shares on the stock exchange, there are other aspects that investors should pay particular attention to: (i) The health of the company listed on the stock exchange; (ii) The news; (iii). Economic calendar and (IV). Political issues.

Another aspect that constitutes an objective interest on the part of investors has to do with the way in which shares are traded on the BODIVA Stock Exchange Market. That is, for some investors, the idea of ​​being able to buy a BAI share and easily become shareholders of the respective institution, for example by matching the closing price until the present article (KZ 22,704.00), constitutes a new reality creating an impact and raising doubts as to how the price in the BODIVA Markets actually works.

Pursuant to the terms of article 55 of BODIVA Rule 4/21 – On the General Organization and Functioning of Regulated Markets, the prices of securities may be presented: (i). Absolute value (Shares and Participation Units); (ii). Percentage of Nominal Value (Non-Adjustable Treasury Bonds and Exchange Rate-Indexed Bonds); (iii). Interest rate (Treasury bills).

The practice of business carried out on Regulated Markets is fundamentally associated with transparency, security in the registration of operations and the existence of ethical standards in terms of transactions. In this context, similarly to treasury bonds, so that there are no abusive prices to be practiced on regulated markets, the trading of shares on the Stock Exchange Market must be carried out in accordance with a price variation band, previously defined in instruction by BODIVA, in accordance with BODIVA Rule nº 5/21 – On the Stock Market, that is, during the stock exchange session, trades involving the shares admitted to Trading must not violate the respective dynamic limits (20%) and static limits of variation of price (25%), serving these limits as a protection mechanism in terms of competitiveness and business security.

According to the table above, it is essential to note that the last price results from the closing price of the trade on the stock exchange, serving as a reference for the following session. In this context, based on the example presented, according to the terms of article 2 of Rule BODIVA Nº 4/21 – On the General Organization and Functioning of Regulated Markets, the difference between the dynamic and static variation limit is that the first refers to the last market price, while the static variation limit corresponds exclusively to the closing price, that is, the investor should only instruct a static price if, during the session, there is already a trade that respects the dynamic variation limit.

Without prejudice to the different types of trading, as provided for in the terms of sub-paragraphs a) and b) of BODIVA Instruction No. structured, contemplating a time for pre-opening and continuous negotiation.

Following the summary of the markets available on the BODIVA homepage, it can be seen that most trades on the stock exchange take place during continuous trading hours, that is, from 9:25 am to 3:00 pm, so it is essential that, from the point of view of understanding of the functioning of the stock market, the investor is familiar with the process of executing the trade in the referred time limited to the principle of priority - price, in accordance with the terms of article 63 of BODIVA Rule nº 4/21 - General Organization and Operation of Markets Regulated.

According to the aforementioned principle, orders on the stock exchange are ranked based on the price followed by the time stamp, that is, the ranking of the order's entry into the market. In other words, it means that orders placed with different prices, the order that offers the best price to the counterparty has priority of execution, while orders placed in the market at the same price, ends up having execution priority of the first order to enter the market.

Finally, it is necessary for the investor to be aware that investing in a financial asset, specifically in shares, is intrinsically linked to three variables: Liquidity, risk and profitability In this context, the understanding of the functioning of the stock market, and the relevance of the three variables , is associated with the need for regular monitoring of the market.

US diplomatic representation to São Tomé and Príncipe moves to Angola