Tchizé dos Santos asked that a "restart" be made to her family, "leaving the past behind. Isabel dos Santos' sister used social networks to make the appeal, arguing that "more important than looking for culprits is to seek solutions to improve the lives of Angolans and social stability.

In her publication, the daughter of the former President, José Eduardo dos Santos, even quotes the former Vice President, Manuel Vicente, stating that "in this war there are no winners".

"I have already said in an interview the engineer Manuel Vicente in reaction to the accusations made by the defense of Isabel dos Santos: "In this war there are no winners," can be read in the publication.

The sister of Isabel dos Santos, also adds that who is losing with this situation is Angola.

"Who is losing is Angola. There are reconciliations that are worth it ...", she writes.

Stressing that we are in the month of peace, Tchizé dos Santos says it is time to "reflect as Angolans what we want for our country."

The former President's daughter says it is time to "repeat the ceremony of April 4, 2002 in Parliament," calling for a "restart, leaving the past behind.

He also considers that "more important than looking for culprits is to look for solutions to improve the lives of Angolans and social stability," and that if "this titanic struggle" does not end, "conditions will no longer exist for the economy to grow.

"If investors fled Catalonia in Spain and the United Kingdom (which are in Europe) due to instability and political uncertainty, who will continue to invest in medium-long term projects in Angola, which is in Africa, knowing that there is political intolerance and fragmentation in the main political parties? 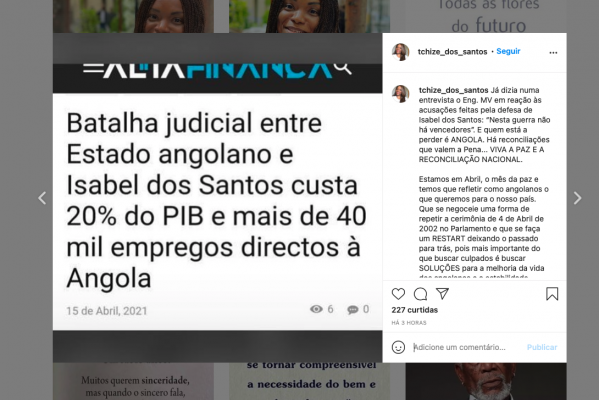 Angola among the founding countries of the Centro do Atlântico initiative